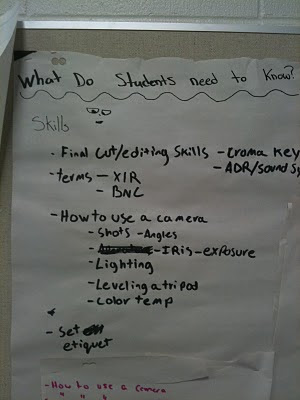 As outlined before I truly believe that students need a say in their learning. I was and still am prepared to make that happen. There has been a small hiccup that I'm going to share with you. This is not going to stop me from achieving our class goals.
Here's what we've done so far.
1. Students are talking the talk. Starting last week we began looking at the curriculum for the first time. The curriculum for my area of interest is brand new this year. The foundation course called COM 1005- Visual Composition (PDF link) is a very general and flighty document. Students began the day by looking at the outcomes in bold and telling me which ones they thought were the most important and why.
Clues to the importance of the outcomes were in keywords, I told them. Students discovered these words were produce, present, and participate.
I asked them why these words gave them the impression that the outcomes were important, to which they said, "Because we're actually doing something". Following this they identified the major outcomes from the second module that we will be weaving together with COM 1005. There were 3 outcomes there as well and the keywords identified were explore, analyze and "prepare & deliver".
2. Students then made a T chart of the outcomes. On one side they put down the outcomes that were knowledge based outcomes and on the other the outcomes that were verbs (because writing them all out again would be just silly, I was told).
3. I asked them to create a list of the types of things we could do to achieve these outcomes. I got TONS of different responses. By the end of this conversation the block 1 class had a grand plan to weave all the projects into a HUGE television variety style program incorporating all the different student projects. WOW! I was blown away. 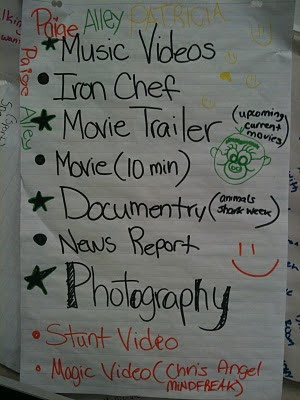 The afternoon class was different and they all had different ideas from film noir to commercials that were parodies and everything in between. They were restless. They were tired of writing ideas down on paper. They were sliding into a passive aggressive mutiny of the process I was taking them through and were not 'feeling' it like block 1 was.
It's amazing how the dynamics of one class are different than another. They were voting with their behaviour.
Crap. My utopian bubble has indeed been burst. Why oh why wouldn't EVERY single student want to be a part of dissecting the curriculum? Silly Mr. Nichol.
We had bitten off more than we could chew in those few days. I was so busy getting them to analyze the meanings of word in the curriculum that I had neglected one simple fact. All these words didn't mean a darn thing without context. Students needed examples.
I had a nice chat later in the afternoon with Neil Stephenson who is one of my go-to assessment gurus. I told him I only needed a minute and our conversation ended up being 40 minutes. I owe you a beer Neil. He commented that what was important was partly the verbs (present, deliver, analyze, etc), but students still needed to know about the essential understandings of the fundamentals. How they share these understandings in context is where the verbs come from. 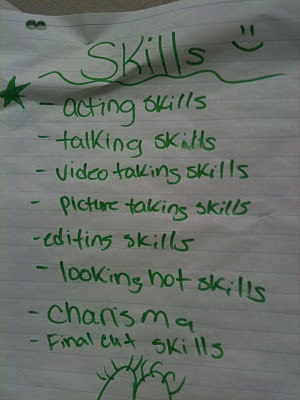 I was going at it from a completely different angle, and in the process may have done a disservice to my students. I think guiding students through the outcomes is still very important, but it should have happened after a few other things. Thankfully there is still time to regroup!
It's time to change gears a bit, and focus on the skills found in the curriculum. From these skills I can scaffold up to the analyzing, presenting, sharing of student work.
There may be some further clarity of this process later on. For now, enjoy the ride!
Posted by Mr. Jared Nichol at 2:25 PM