My First Modelling Challenge for Myself
40 hours of work into the Makerbot obviously isn't enough. I keep coming back for more! This weekend I was able to spend some awesome time with a friend and fellow ADE Jason Sand. If you aren't following Jason on the Twitter, do it here now! Jason and I were at a Final Cut Pro X training session for two days.

During this weekend of hockey and refreshments and keyboard shortcuts galore we tried unsuccessfully to print an iPad audio megaphone on the Makerbot. I'm going to try to print from an SD card which is highly recommended from the Google Makerbot Users forum.

While driving to the training we talked about things we like, and the fact that we both have the iPod Nano watch clip from Lunatik. As we drove Jason remarked how he uses a second clip for his to keep the bands attached, to which I responded, "We could print that." The conversation continued and more and more anytime something came up about an object we agreed that "we could print that." With a 3D printer at your disposal you honestly look at the world in a different way. 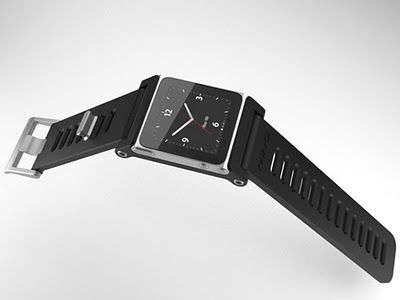 Google Sketchup to the Rescue
With my nano watch case in hand I took to Sketchup to try and model the holder. I'd really like to print the holder in many colours and reproduce it. Most importantly as my students work on designing their first product, a name keychain, I want to show them that I'm learning as well. 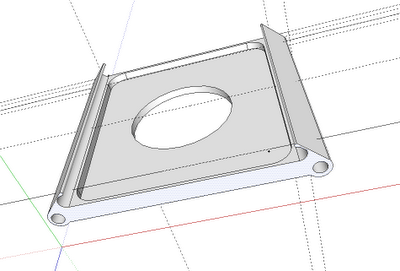 I tinkered for about 45 minutes to produce a fairly good model of the watch clip. Actually I'm pretty darn proud of it. It's not to scale, but I learned a lot about modelling today. First, when using Sketchup, it's good to think of everything as a product of shapes being added or taken away. Second, it's way easier to model if you start of one axis and stay on that axis. I started by clicking MODEL>Camera>TOP and then began my model.

My version of the clip started out as a rectangle and from there I pushed, pulled, and figured out the curve tool. I'm excited to share this with my students and model it again after I take precise measurements with some newly acquired digital callipers.

I think a cool challenge for students in my class would be to take an object, and have them take measurements from it, sketch it, model it and try and print as close to the original object as possible. They'd get gain some serious skills and confidence in modelling then!

Implications for Teaching
Copyright, copyright, copyright! What gives me the right to copy an object and make it? It turns out, this is a grey area. An interesting article from a NY Times Bits blogger poses the ethical and legal questions about copying objects in his post "Disrtuptions: The 3D Printing Free For All." In this interesting post there is a comment about the difference between an aesthetic object versus a useful object:

“Copyright doesn’t necessarily protect useful things,” said Michael Weinberg, a senior staff attorney with Public Knowledge, a Washington digital advocacy group. “If an object is purely aesthetic it will be protected by copyright, but if the object does something, it is not the kind of thing that can be protected.”


So, aren't a lot of ideas basically revised versions of previous products? This is the case of the coffee mug that has been proposed in Nick Bolton's post. Who owns the coffee mug? If it's a useful object, am I going to be sued for copyright or illegal manufacturing? I don't want to be the next Samsung with Lunatik coming after me for reproducing it's product in another colour that I like.


Where does this put teachers who are using 3D printers in their classrooms? Do we tell students we will not print anything that is an idea taken from someone else on moral/ethical grounds? I'm kind of answering my own questions here, but perhaps my own printing of the Lunatik could be the opportunity for students to reflect about their own designing. I also don't know what different copyright laws have on physical useful objects in Canada versus the USA.

In the end I'd honestly like a student to design their own iPod Nano clip or watch, so perhaps after I'm done this model I will show them some ideas I have to make my own design.

From Days Gone By
What's starting with these economic 3D printers is that people aren't automatically thinking that they need to throw things out. Need a 2003 Dodge Neon Visor clip? Download it and print it! 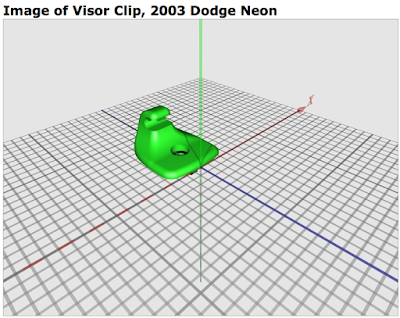 Or better yet, take the original design that is shared online and make it better.

I think about when my great grandparents came to Canada and settled west of my home town, Cold Lake, Alberta. When they bought some nails, they expected that they would last a long time. These nails would be used in fences and buildings, and if these structures were torn down, the nails were saved. If they were bent, they were straightened. My grandfather showed me how to straighten nails in the summers we spent at his house, he had a whole coffee tin full of them. Somehow now it seems like it can be my turn to keep things alive in their usefulness. That's a cool feeling.


As teachers we do have a responsibility to help student be aware of ethical/moral issues in what we do. What are your thoughts about students designing products like I have here?


Also, coming up this week we will start out 20% "tinkertime". I'll be sure to share how this goes soon.