It Began With a Marshmallow


Today was an awesome day. Hot on the heels of some great collaboration and conversations with colleagues and tweeps I started my Design Studies unit with The Marshmallow Challenge. Huge thanks to Rose Lapointe for guiding me in this way. I now realize that I was the student and she was the teacher during our conversations. I learned so much as we hashed out timing, and supplies, and so many more ideas for this activity. It looked like this on her board: 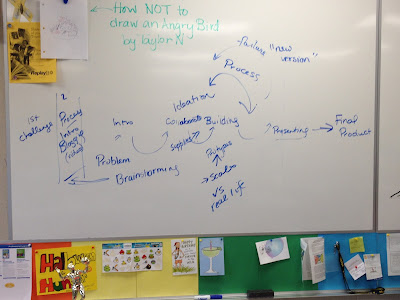 On Sunday we chatted about the Design Process, and I took more away from that conversation than I had in a week of reading. Conversation kicks @$$! I highly recommend it.

If you haven't seen the TED Talk about the Marshmallow Challenge, make sure you check it out. The challenge is for groups to take a marshmallow, 20 spaghetti sticks, a metre of twine, and a metre of tape and build the tallest free standing structure they can in only 18 minutes. There is also a simple blog page that you can access to view the concise instructions for your class. I would recommend this activity for just about any age level. In fact, one of the findings shared on the TED talk is that Kindergarten students out perform most adults!


I took about 20 minutes to give an overview of the challenge, the rules, and then I set them free. First thing I saw was that out of the 4 groups of 4, almost 1 person form every group checked out right away. Others were busy talking, drawing, and getting ready to build. 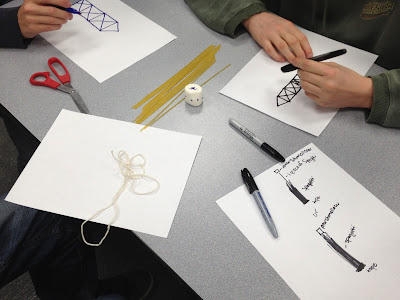 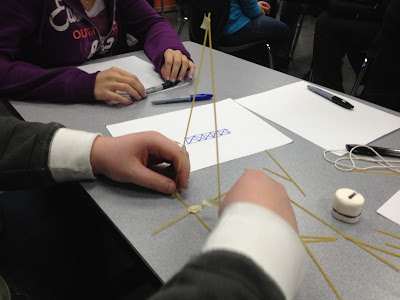 I let the students have the 18 minutes and gave time cues on a countdown on the whiteboard on my Macbook. Most groups took 4-5 minutes just to talk and draw. One group grabbed the spaghetti right away and talked as they started making columns for their base. At the end of the 18 minutes they had to remove their hands from the structure. 2 out of 4 failed due to the weight of the marshmallow snapping the spaghetti. Catastrophic failures occurred. The 2 remaining measured a mere 18cm tall and just under 40 cm tall. Not bad for a first try.


I asked students some guiding questions about their work:
1. How much of your time was spent planning vs building? Most said for every minute planning they had 3 minutes building.
2. How many of the groups created more than one design in the 18 minutes? None of the groups had.
3. What group dynamics affected your ability to build the tower? Some were told they were bossy, some felt they didn't feel comfortable talking and sharing, groups also said that there was overall, a lack of communication.
4. What changes would you recommend if you could do it again? Most talked about the stability of the base as the key to success. Planning and communication came up again. 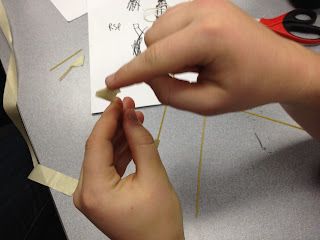 5. Did you see your tower as a success or failure? Even those who did have a standing tower said yes. They wanted it to be higher.

At this point in a class I threw them a curveball. I started the TED Talk and stopped it about 30 seconds in. I told them to think of their first tower not as a failure, but as version 1.0, just like an early version of computer software. They then found out that after the video they would get to build version 2.0 with another set of fresh supplies.

Instant planning started. They were watching the video and sketching, and getting ready to build a tower in another 18 minutes. 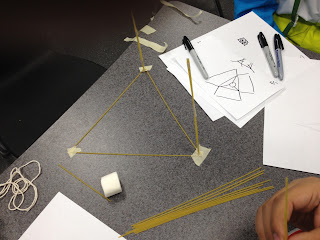 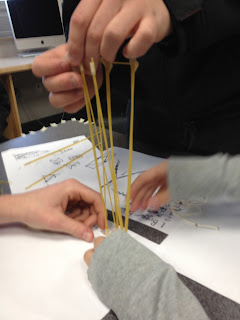 After the TED Talk I let them loose again. There were less groups drawing again, most were building just about right away. This was great to see the enthusiasm of attacking the second round of challenge, but also something I need to be aware of as we move forward. They were learning by doing, and since the last tower wasn't a failure, they took the parts of the previous tower that worked and incorporated them into their new design.

With the last seconds counting down I thought 2 groups would have broken towers again, but luckily they stayed upright. This time 4 of 4 towers soared above the desktops. They measured 18cm, 24cm, 47cm, and a whopping 67.5cm! The team pictured below that had the tallest towered placed a stabilizer string on the tower and fastened it to the desktop with tape at the very last moment.

I told them that I was very pleased and proud that they were able to either improve their tower immensely, or get it to stand the second time around. More importantly, all but two students worked hard in their teams to make their "Marshmallow Tower 2.0" higher than their previous attempt. 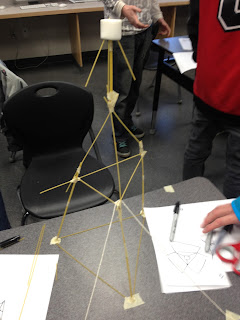 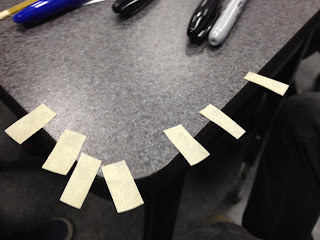 Next up is a Transportation Challenge where students have to use the design process to come up with a solution to a BIG problem that I'm calling the Transportation Challenge. How can we get people and other goods across a span safely and efficiently? This is something that in remote locations in the world with fragile infrastructure systems and unpredictable weather, can directly affect communities. People can be cut off from much needed supplies.  Students will be working in class with a 1.2 metre span between two desks to come up with a system that can be installed when existing roads, bridges, and ferries are washed out or impassable.

Tomorrow will start with us reviewing the steps we took with the marshmallow towers. As they describe their steps, students will actually be identifying their actions as parts of the design process. From their I will frame the Transportation Challenge and tell them that their team has been hired to solve a issue about food and supplies not reaching people in need.

How would you use the Marshmallow Challenge in your class? Any ideas for how I can facilitate the next challenge? 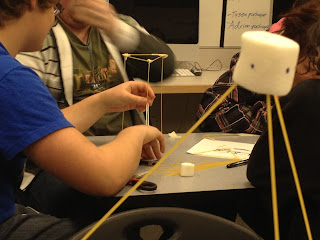