Last Friday I was away working with some of my awesome broadcasting students and had a substitute teacher take my class. While I was away our director ran the newscast as we always do each day at Cold Lake High School, and everything seemed to go off without a hitch. The news had some audio issues with a mic and our weather man had to pinch hit as an anchor, but nothing out of the ordinary.

On Friday night at the other school where we were broadcasting basketball games a staff member and a couple students asked me if I had seen the news and what 'that team had done'. I hadn't. Turns out that my technical director (switcher operator), chose to post an subtle, but not so subtle message on our 2 minute countdown to the news promoting a party that weekend. My first reaction was anger, but it quickly turned to disappointment. So much so that I lost serious sleep over it Sunday night before I dealt with it at school.

This morning we had a team meeting for a newscast post-mortem and I asked the team how things went on Friday. The rest of the team talked about how they weren't very serious and things barely got done, but the news was complete in the end. No one mentioned the elephant in the room about the party announcement.

When I asked about the announcement the technical director took full responsibility for the words that were put on the screen and he apologized to the team. I asked the team what they thought should happen (knowing exactly what I was going to do) and they said that our tech director should be taken off the switcher. The decision to put the party location on the screen was that of the individual, but it was important to remind them of the fact that it reflects poorly on the all those at RTV.

Some felt the individual should go on air to apologize, other felt that losing the position of technical director was enough. In the end I offered something in between. I brought up how Global Edmonton's Mike Sobel made some disparaging comments towards a woman on air last year. He was immediately taken off air by Global, but then after his public apology was able to go back on air. 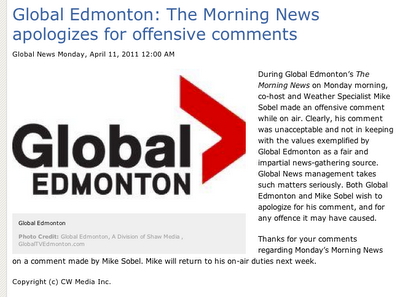 In our case the student was removed from the job, given a new job as a script writer/communications person for our news crew, and has been told that they will work up to their position again in the future.

The lesson here, give kids a chance to make it right. I suggested we send out a press release which is what that student did this morning. We researched press released together and I had my student director approve the message before it was sent out. Soon after I received a thank you note from our principal as well as a comment from a staff member who said that it was a very professional way to deal with the situation.

Overall it turned a crappy situation into a positive learning experience. I'm proud of my news team for how they handled our morning meeting about the incident and how well the student handled it and has made steps to make it right publicly for our team. 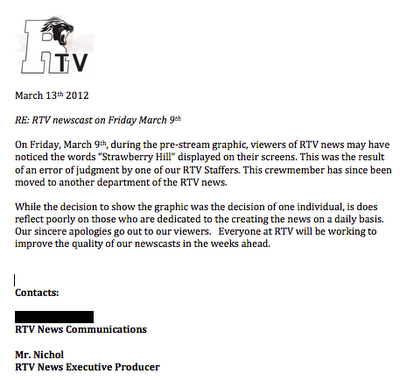