With the semester winding down things I'm thinking about the past three months with my design studies class. More than anything, what I hope to get from this three month coup of the class is some serious learning from the students and myself. Here's a quick look at how things are going. 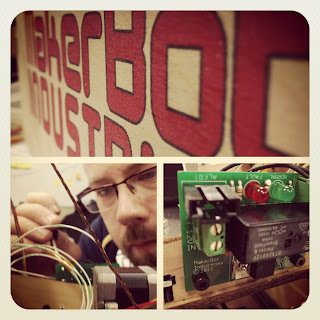 Enthusiasm FTW!
Students who are motivated in the class and are already tech savvy are rocking the Kinder Toy Project . Others who were able to go with the flow in group work in video projects are finding it tough because 'it's so much work' as one kid said to me. The stakes are high here. Without a completed project students in my class will not be printing a toy for their kindergarten partner which will be disastrous and will literally crush the little ones. 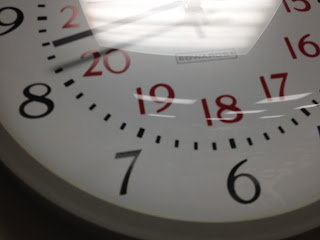 Time- Where did it go?
I need to give more time for modelling and working things out. The top students who've taken to Sketchup are just finishing this week. The middle of the pack probably needs another week, which we don't have. Not to self- add more time. Maybe we spent too much time making cardboard prototypes, but I thought it was important for them to do this step to learn about scale and form and the limitations of 3D printing. The Makerbot can't do overhangs of greater that 45 degrees very well. Any model with a 90 degree overhang. The image below demonstrates this. The cone was printed upside down and was successful because the overhang was just fractions of a millimetre each successive layer. The object below with the overhang would not print because the nozzle would print plastic into air with nothing to support it. 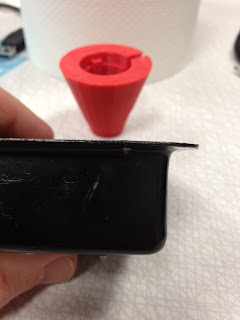 The Mad Skillz (is what the kidz say)
Fully admitting that I don't know all the answers has happened often during this project. When sitting beside a student discussing a problem I have been telling them I don't know, but here's what I think we could do. Then if that doesn't work, we ask the rest of the class. More often than not another student wanders over to share their knowledge to help us out.

Perhaps this project was a bit soon too with their introductory skill levels with Google Sketchup, and we needed some more foundations in scale and understanding the basic tools. Perhaps having them jump in was a good thing as well. When I wanted to learn how to build a 3D printer I jumped in too, and I made a lot of mistakes. I guess this may tie back to my point about time. The greatest challenge for us right now is taking a model of the walker toy, and intersecting it (welding it) with the students' model. What you see below is a successful intersection of two models were the negative imprint of one model is left in the other. This will mean that the walker bases will fit perfectly into our toys. Unfortunately, intersecting a model with a sphere doesn't seen to be working very well right now. 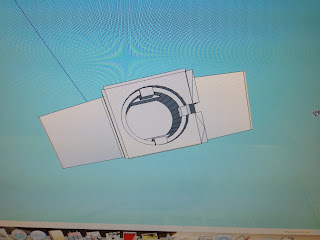 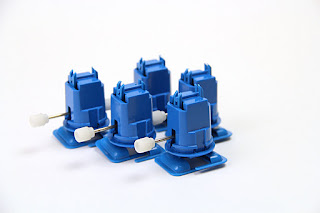 Outcomes Awareness
Communicating learning is very important to me, but I think this is where I'm falling down. Asking students to blog their progress has been OK, but the depth of their responses isn't where I like it to be yet. One thing I will take from this is I need to blog along side of them and use better guiding questions. Asking a new student blogger to demonstrate their learning in words about "their understanding of 2D and 3D forms" isn't an easy task. Transferring their modelling of physical things into words on a blog or even paper doesn't jive. Maybe video updates might work next time? Formative feedback daily is way more helpful than even a weekly blog. I'm not dismissing blogs, because I want the tool in my class. I just need more work on my end to make it more approachable for my students. 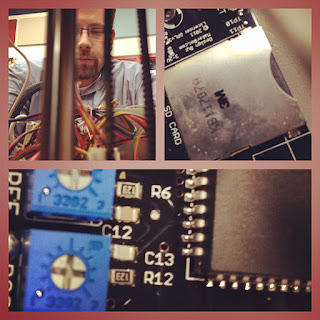 Technology
Did you know that technology doesn't always work? The Makerbot I built first has been running smoothly, but there is a backlog of designs to be printed. Occasionally the room temperature affects the print, or the nozzle height needs to be calibrated, so its takes some tweaking to get things just right. Realistically getting 1 model per class printed is a success. The second Makerbot I'm working on is giving me grief because of an electrical issue (that is my own) that I can't figure out right now. 20 hrs on each Makerbot build has been a lot of time- but I wouldn't change what I'm going for the moon!


Help! What ideas do you have about my class blogging/outcomes awareness, or maybe you're a Sketchup pro that can help us with best ways the intersect (weld) models together? Drop me a comment!