Letting Students Own Their Learning 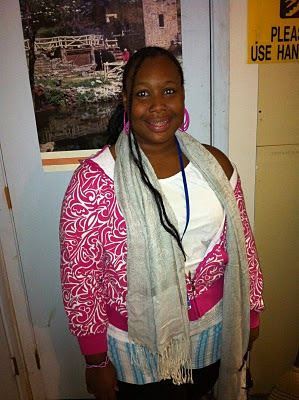 Today was a busy day. So much going on at once and Jim has it down to a science, or art, whichever you'd prefer. I'd say its a little of both. Yesterday I was on camera and got to do a pan to key, and today I was in the control room. Jim took a few pics of the crew working for me to share with y'all (Arkansas is rubbing off on me!) He took the pics with his iPhone 4. The more he uses this device the more I want one, but that's for another post.
Students start class at 8:40 with a production meeting. The director, in this case it's a girl named Lashayla goes over who is doing what. It's her job to keep everyone in line, and she does a great job. You need to be friendly and approachable as a director, but know when to boss people into line. If students in positions are absent the rest must step up and get to work! Missing today was a camera operator so the sports anchor said he would do it. All sports and weather are recorded within 20 minutes of the opening production meeting. This is to ensure that all segments including story packages can be loaded into a timeline in Final Cut Pro prior to the actual broadcast. Weather and spots are both done in front of a green (chroma) screen to add graphics. The weather girl creates graphics for the background in Keynote and simply uses a wireless clicker to go from one graphic to the next with a quick cross dissolve. Today's weather was special because she included the weather from my home town, Cold Lake, Alberta for the North Little Rock High students to see. 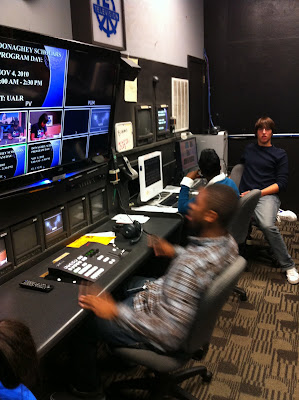 One thing that impressed me is that Jim lets the students do their jobs. He's running around putting out little fires and giving 1:1 help to those who need it, but he stays out of the broadcast.
Students are given that chance to really own the news, and they do it well. After doing the news for a few weeks already these students really know their stuff. Jobs in the news room include the director, technical director, graphics creator, copy writer (scripting), sound controller, camera operators, anchors, and reporters of many kinds. ALL anchors must shoot, edit and submit news packages for the broadcast They are not simply talking heads. Anchors are rotated often so several people get the practice at that position.
This is the ultimate learning environment with REAL pressure. At the last minute the birthday graphic wasn't exporting so they couldn't do the birthdays and the segment had to be scrapped. The final script was already printed, so the director had to tell the teleprompter operator, the anchors and technical director to scratch it. They realized that a graphic for beside the anchor in a pan to key was on the wrong side so the anchors had to remember to get out of the way of the panning camera on their partner. 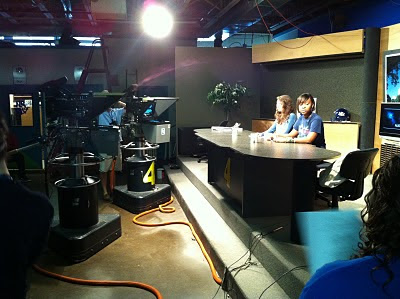 After all segments are pre-recorded and dropped into a timeline in Final Cut Pro the anchors go to work. They use the teleprompters to read the scripts, and introduce the packages. The audio went dead on one of the anchor's mics so they had to work to find a solution fast. All of this was going on at a furious pace while students from another school came by to observe the newscast. The sports reporter was then told that the audio was blown out on his package and he needed to rerecord it. He quickly popped into another room, got the levels he needed and dropped the revised package onto the server in Quicktime format to be picked up and put into the master timeline in Final Cut. The Daily News was ready to begin! 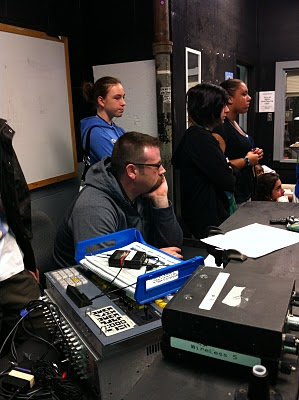 I sat beside the sound board and had a student whisper to me, "It's cold in Canada, eh?" and smiled. With only 15 minutes to go in the period the students where cutting it close because the news is usually around 7-10 minutes.
The real world pressure of getting the broadcast done on time really made them perform. Ths pressure is in an environment where students work hard and are supported by each other to do a great job. Jim has high expectations and therefore the students have high expectations. It was pleasure to see the behind the scenes of the operation at the Daily News at NLRHS! I'm going to take back so many great ideas to Cold Lake High School, I can't wait to share them with my students and let them work out how we can do the news so they can truly own their authentic learning.
Posted by Mr. Jared Nichol at 6:50 PM